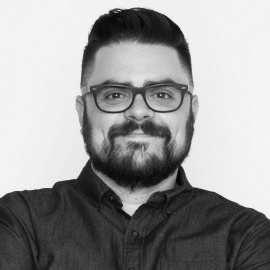 An Executive Portfolio Director in Chicago, Justin Massa focuses on how to magnify the impact of human-centered design through new collaborations, disciplines, and methods. He is part of teams focused on scaling data science and strategy across IDEO. His consulting work centers on how these approaches can create entirely new ventures for large companies.

Justin was previously the founder and CEO of Food Genius, a venture-backed big data and analytics company in the food industry whose customers included US Foods, McDonald’s, Safeway, Coca-Cola, Little Caesar’s, and Kraft. Food Genius has been named to Entrepreneur Magazine’s “100 Brilliant Companies” list and was the recipient of a Chicago Innovation “Up and Comer” Award and a Core77 Design Award. Food Genius was acquired by US Foods (USFD) in March 2016. Justin first met IDEO in the early days of Food Genius – when the company was just months old, they were the first-ever Startup-in-Residence.

Early in his career, Justin was a radio DJ, a fair and affordable housing advocate, a kindergarten teacher, and an undercover civil rights researcher (although not all at the same time). He is a long-time resident of Chicago’s South Loop with his wife and daughter.

When Robocops Rule: Ethics, Design and The Future of Human-Centered Data Science

Justin Massa, Executive Portfolio Director at IDEO, is an innovator and entrepreneur with expertise in the intersection of design and data. Justin will share what it means to design with data, and what it means to have a multidisciplinary approach to the design process. He’ll also take us through why human-centered design matters as we discuss AI ethics and its impact on individuals and communities.